The Golden State Warriors are starting their season after winning the championship last year in a near records fashion so far. They need 1 more win to tie the best every 15-0 start (by Michael Jordan's Bulls).

Stephen Curry (last years MVP) is one again leading the Warriors. So far he is making his MVP last season look like a mediocre one. Stephen Curry set the record for 3-pointers last season, with 286. He's currently on pace for 415.

The Philadelphia 76ers box score last night shows one of their starters in last night's game didn't even play. I would think they would be better off playing all 5 players. They fell to 0-13 with a 113-88 loss to Charlotte Bobcats (owned by Michael Jordan). 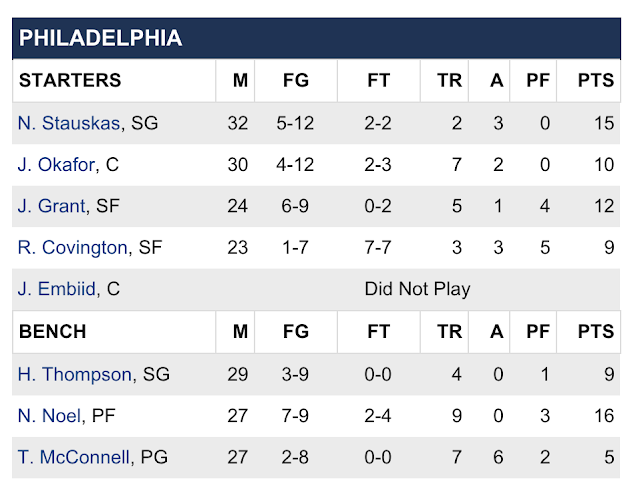 Ok, maybe this was a misprint, but with Philadelphia this year that isn't a sure bet. They really did send 6 players onto the court 2 days ago.

Related: Frank Kaminsky - College Basketball Player of the Year 2014-2015 (he is playing for the Charlotte Bobcats now, by the way #2 Jahlil Okafor is playing for Philadelphia) - Davidson Students Get Free Sweet Sixteen Trip (when Steph Curry was playing for Davidson and Wisconsin was the opponent - Kaminsky later played for Wisconsin) - Universities Again Abandon Fans/Mission to Increase Pay to Administrative Staff/Coaches - Why Don’t Football Players Just Thrown the Ball Out of Bounds to Stop the Clock
Posted by Curious Cat at 7:55 AM