RSS feed readers are the best way to keep up with blogs you want to read, in my opinion. You subscribe to those blogs you want to follow and can group them into categories (management, engineering, travel, investing, funny, etc.). Google Reader become the most popular way to manage your subscriptions. But Google is closing down reader this week.

If you read blogs and are not using a RSS feed reader you really should try using a reader. It something I can't imagine doing without.

Thankfully one of the things Google does well is to let you retrieve the data you put into there various products. So you can download your subscriptions (which you should do). But now you are left to go find a replacement.

Last year I got Reeder to improve the experience of reading my feeds. But Reeder used Google Reader as the database for blogs you subscribe. I still like them, but they have done a pretty horrible job of providing details on what you are suppose to do given the imminent demise of Google Reader. I might just drop using Reeder.

The best option I found for me, is The Old Reader (which is super easy to setup and import your Google Reader setting from). I would make sure whatever option you chose has an export option (to get your subscriptions out). Some companies do not support good export options - I would pass on those companies products (for readers and other things).

Posted by Curious Cat at 1:31 AM No comments: 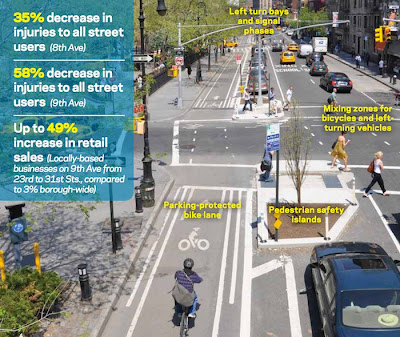 Urban planning can greatly increase our quality of life. This report has some good ideas and shares results of tests of improvements - Measuring the Street: New Metrics for 21st Century Streets.
Results from first protected bicycle lane in the US: 8th and 9th Avenues (Manhattan):
Related: The Case for Physically Separated Bike Lanes (2007) - The Rebirth of Cities - Designing Cities for People, Rather than Cars - The Economic Benefits of Walkable Communities
Posted by Curious Cat at 11:43 PM No comments:

The USA constitution has fairly good protections in place. McCarthyism gives a extremely clear example of the dangers when those with power allow a few to abuse the system. And we have many more than a few abusing the system now.

I believe most of those required to carry out the security theatre of the TSA are repulsed by what they have to do. They need a job though. And so they do what people do in those situations they justify the behavior to themselves. They attempt to justify their behavior to themselves in order to make it tolerable to participate in such behavior. Many will suffer as the attempts to mask their true feelings are far from perfect. A few will actually enjoy mistreating others. And some will not see a problem - there are plenty of people that happily go along with things many others believe they have to be corrupt to go along with (but that assumption is wrong, they see things differently and most often have overly simplistic world views that work pretty well for keeping them happy, I just do what the TSA tells me and whatever they tell me must be good because they are in charge).

Not that this is 100% of what everyone thought that everyday, but this is the main model of those police states. Sure you have a few deranged people that see a system ripe for abuse and they have power and take advantage of it. And sure, authoritarian police state administration will attract more power hungry psychopaths that don't have much respect for individual liberty. But I still think the main force is just people trying to get by and if the rules are such that authoritarianism and disrespect for individual liberty are allowed they go along because such thinking has been made acceptable (not because they think they are being evil and they like it).

The police state apparatus builds an ethos that freedom is risky and must be monitored - not to be evil - but to help. Those in the USA perpetuating the police state are not doing so to promote big brother government. They just got trapped into a system where they see the dangers of freedom and they believe they are on the site of right and good.

The danger of authoritarian government was understood. The constitution puts barriers in place to protect society. But those with power see the barriers are mere inconviences to avoid. In the last 10 years the extent of our slip into a police state has been dramatic and is critically dangerous to our society. But the most important point is once you reach a point where this is beyond all reasonable debate it is far far far too late. Corruption of liberty must be addressed early on. If the police state is allowed to grow it becomes nearly impossible to turn back. I fear we are already too late in the USA. But who knows where that fulcrum really is. Maybe we are not too late.

Totalitarian thinkers don't like freedom of citizens, so they are likely to outlaw using tech that doesn't allow the police state full access. So the most totalitarian states won't allow citizens legal access to protection from the state. My guess is many states are going to take extreme totalitarian views on this. It sure seems the USA couldn't be more totalitarianism in their current stance on this issue. It appears to be that you have no rights to freedom if technology is involved.

It is hard to separate that thinking from evil-big-brother-thinking but I think it is a mistake to think that those wanting big brother style government intrusion think they are trying to create the big-brother-government from Orwell's 1984. They have convinced themselves that really we are just trying to get a bit of information why can't you just trust us to be different than all those warnings you have that actions such as ours (police state) are bad. We are not like all those others that did it for bad reasons (either in history of literature) we are doing so because how else can we control dangerous risks. This is true for the SWAT team members crashing into innocent people's houses over and over and over. And it is true for the politicians that really seem unable to both appeal to voters and think effectively about policy.

And is probably most true for leaders of those at the DHS, NSA, FBI, CIA, NSC and in the White House. They are so fearful of all the risk and they have so much trust of their government organizations that they can't see the obvious comparison of what they have created and a police state. They know they will be blamed if catastrophes happen. Eliminating the risks of those events in the short term is nearly 100% of their focus. Concerns about individual liberty just don't enter their thoughts. They don't see themselves as big brother. They see that as ludicrous, not worthy of consideration. Certainly not something to moderate their behavior. That is the risk. That is the danger. And we have already created such a powerful police state that dialing back the big brother thinking is going to be extremely difficult, if it is possible at all.

The recent news on the NSA has sparked outrage and fear but this doesn't seem like much news to me. The police state mentality of the last 10+ years has carried with it this type of thinking. I find many of the previous revelations much more troubling than this latest one.

Related: Librarians Standing Up to the Madness (2009) - Freedom Increasingly at Risk (2008) - Security Theatre Thinking is Damaging the USA - Watching the Watchmen (2008) - Tired of Incompetent Government Harassment (2007) - Failure to Address Systemic SWAT Raid Failures (2007) - Lawmakers now use so much 1984 Orwellian speak you can't trust what they say (2005) (check them with trustworthy authorities EFF and others)
Posted by Curious Cat at 2:45 AM No comments:

We Should Build Secure Software Systems

Once again Bruce Schneier is insightful and provides much more sensible advice than that given by the homeland-security-complex that spends billions to provide massively inconvenient and ineffective security theatre.

It's impossible to build a communications system that allows the FBI surreptitious access but doesn't allow similar access by others.


The FBI wants a new law that will make it easier to wiretap the Internet. Although its claim is that the new law will only maintain the status quo, it's really much worse than that. This law will result in less-secure Internet products and create a foreign industry in more-secure alternatives. It will impose costly burdens on affected companies. It will assist totalitarian governments in spying on their own citizens. And it won't do much to hinder actual criminals and terrorists.
...
When it comes to security, we have two options: We can build our systems to be as secure as possible from eavesdropping, or we can deliberately weaken their security. We have to choose one or the other.

Related: Governments Shouldn't Prevent Citizens from Having Secure Software Solutions - The last thing you want to do is increase the amount of hay you have to search through - Bad Security on Government Required RFID e-passports
Posted by Curious Cat at 1:43 PM No comments: