Ender's Game: Back to the Drawing Board

Ender's Game: Back to the Drawing Board, quoting Orson Scott Card:

Warner is still strongly committed to making Ender's Game into a great movie, and we agreed to another year or so of option, starting with a new script written by me (a page-one rewrite not based on any previous script, including mine).

First, I can't believe Google actual did what is claimed (my guess is, that it is a misunderstanding).

If Google is going to give certain AOL ads different treatment (showing them when their best algorithm shows other ads have a higher value), that would be stupid (the degree of stupidity would depend on the degree of favoritism they give, in my opinion - and not a linear scale).

It is possible to give AOL a better deal without altering the algorithm - such as Google taking a smaller slice of the profit on AOLs adds. So if normally the advertiser has to pay Google a 30% fee and Google made AOL only pay a 20% fee for the same dollars from AOL and the same ranking algorithm (if it were maximized for showing the highest overall value ads - as opposed to the highest Google profit ads) then AOL would get "priority" placement but within an overall optimized system. In this case you keep the algorithm in place for showing ads as if Google were taking their normal cut but then when "charging" AOL a discount is given (or Google "pays" the normal charges to the advertiser as the Washington Post article seems to indicate).

Essentially Google accepts less. They could also optimize the algorithm for Google's profit but I imagine they don't do this now. Otherwise volume discount agreements would not be worth much. Of course, I haven't given this much thought I might be missing something obvious.

But even if Google made that decision, stupid moves are not all "jump the shark" stupid. I agree that it is not the right term to use.

See this amazing illusion. Maybe you shouldn't believe what you see with your own eyes.
Posted by Curious Cat at 8:23 AM No comments: 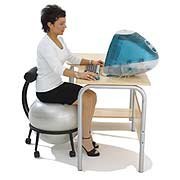 Or the more radical: Ball Chair
shown in photo. This might be a good gift for someone who has almost everything, what are the chances they have one of these?

Sissel exercise ball
Posted by Curious Cat at 8:14 AM No comments:

The New Rich-Rich Gap by Robert B. Reich:

In recent years, the top fifth of American workers has held 85 percent of the country's wealth. What I didn't predict was that the three tiers would change shape so dramatically. The top and bottom tiers are growing, and the middle shrinking, much faster than I expected. Symbolic analysts now make up more than a fifth of all jobs in advanced economies, up from about 15 percent 15 years ago. Their incomes in developing economies are soaring, relative to other workers'. In China, the wealthiest 5 percent now control half of all bank deposits. India's symbolic analysts are becoming a new national elite.
...
Yet unless the advanced economies invest more in education and basic R&D, they could lose their global lead in science, engineering and high-value-added production within a few decades. China and India are now graduating more engineers and computer scientists than are emerging from American and European universities. At some point, national symbolic analysts in advanced economies will lose ground.

The changes are happening much faster than I thought they would. And I think the predictability of what will happen going forward is becoming much more difficult. The system has a capacity for huge and rapid change.
Posted by Curious Cat at 1:04 PM No comments: