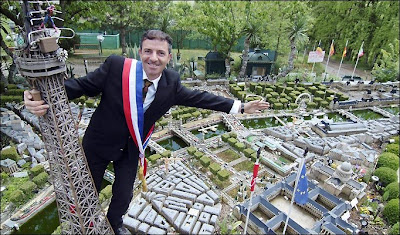 Gerard Brion (in photo) shows off his model of Paris. He has spent 15 years (he is now 29) crafting a model of the Eiffel Tower, Arc de Triomphe, etc. out of old concrete blocks, baby food jars and soup tins. His garden in Vaissac in the South of France is now a tourist attraction.

200 years of newspapers, the Times (London) are now available online. Good move. "Every issue of The Times published between 1785-1985, digitally scanned and fully searchable"

Firefox 3 is close to being released (it is in beta now). Here is a nice screencast on new features. When I recently upgrade my Ubuntu it automatically installed the Firefox 3 beta (which I must say I don't really think was the greatest - asking would have been better). But for that reason, I have been using it and I like it. The menu bar improvements can actually be annoying in some ways but the advantages outweigh the problems with that feature, I think.

One very annoying thing with Firefox 3 is the Google toolbar is blocked. It doesn't comply with some new upgrade rule I think. Still I don't understand why they won't let me use the toolbar if I want (the message seems to indicate it is not a problem of incompatibility with Firefox 3 but not following some rule for how upgrades should be done. A number of plug-in have this problem but that is the only one that I really care about. I surprised Google hasn't made this work - even though it is still in beta since it is very close (weeks?) until the release.
Posted by Curious Cat at 3:19 PM No comments:

Photographers are not a Threat

Are photographers really a threat?

Since 9/11, there has been an increasing war on photography. Photographers have been harrassed, questioned, detained, arrested or worse, and declared to be unwelcome. We've been repeatedly told to watch out for photographers, especially suspicious ones. Clearly any terrorist is going to first photograph his target, so vigilance is required.

Except that it's nonsense. The 9/11 terrorists didn't photograph anything. Nor did the London transport bombers, the Madrid subway bombers, or the liquid bombers arrested in 2006. Timothy McVeigh didn't photograph the Oklahoma City Federal Building. The Unabomber didn't photograph anything; neither did shoe-bomber Richard Reid. Photographs aren't being found amongst the papers of Palestinian suicide bombers. The IRA wasn't known for its photography. Even those manufactured terrorist plots that the US government likes to talk about -- the Ft. Dix terrorists, the JFK airport bombers, the Miami 7, the Lackawanna 6 -- no photography.
...
This is worth fighting. Search "photographer rights" on Google and download one of the several wallet documents that can help you if you get harassed; I found one for the UK, US, and Australia. Don't cede your right to photograph in public. Don't propagate the terrorist photographer story. Remind them that prohibiting photography was something we used to ridicule about the USSR. Eventually sanity will be restored, but it may take a while. 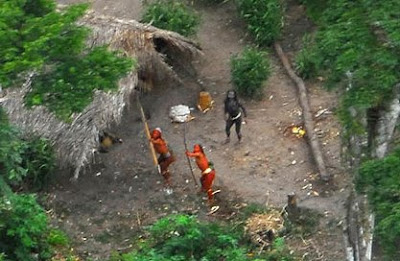 The uncontacted tribes in the forest borderlands of Peru and Brazil, such as those pictured last week pointing a bow and arrow at a plane, are facing a threat from something beyond their wildest imagining.

It comes from a thing of which they've never heard, being built to serve a people who they have no idea even exist. It is a road, and in time it could lead to their destruction.

The 711-mile Trans-Oceanic Highway, which will eventually link the Amazon river ports of Brazil with the Pacific ones of Peru, is the biggest threat to the indigenous peoples – uncontacted or otherwise – in that part of South America, says John Hemming, celebrated expert on Brazilian peoples
...
There are, said Mr Hemming, thought to be 34 uncontacted groups in Brazil, and around 20 in Peru. Most live in forest that already enjoys some protection. But the damage can begin even before direct encounters occur, with incomers making tribes flee traditional territory and move into conflict with other groups.

Yet it is when there is face-to-face contact that bad things can swiftly happen. Disease is by far the biggest hazard. "These people are formidably fit," Mr Hemming said, "but they are fatally vulnerable to our everyday illnesses. Among them, such diseases as the common cold and measles are unknown and, if caught, deadly. After contact was made with the Surui people, for instance, half of their 400 members died from 'Western' illnesses within a few years.