Google is again updating the published page ranks. PageRank changes daily (inside of Google). About four times a year Google updates the pagerank that is published in the toolbar. So for example, a new site for us that offers free CSS web site templates, shows a pagerank of 4. The fact that it showed no page rank last week and now shows a pagerank of 4 doesn't mean it increased in the last week. It has been obvious for some the site has been getting increasing traffic and likely had a reasonable pagerank. Now Google has just published it.

You can use another new site to the curiouscat.com family to check the pagerank for your sites: Multi PageRank Checker (pagerank 1 by the way). If past performance repeats with this update of pageranks the ranks can often move around for several days before settling down to the new rank that will be displayed for several months. Some of our sites:

Pagerank uses a logarithmic scale - so a pagerank of 5 is 10 times greater than one of 4 and 100 times greater than one of 3. Also say you have a 5.1 that would be 10 time greater than 5.0 - but Google only publishes 1 digit. So the real difference between pages shown as 4 and 5 theoretically could be anywhere from say some tiny percentage to nearly 100 times (if it were the lowest possible 4 and the highest possible 5). It seems very likely Google uses a logarithmic scale or something very similar but I don't think they have confirmed this publicly. Some people think perhaps there is a difference of say 6 times for each integer so a pagerank 5 is 36 (6*6) more than and pagerank 3. That is certainly possible.

The bad dream of DRM continues. Yahoo e-mailed its Yahoo! Music Store customers yesterday, telling them it will be closing for good—and the company will take its DRM license key servers offline on September 30, 2008. Sure, it's bad news and yet another example of the sheer lobotomized brain-deadness that has characterized music DRM, but the reaction of most music fans will be: "Yahoo had an online music store?"

If you think this sounds familiar, it's because this happened earlier this year with MSN Music, although Microsoft has since relented and will keep the DRM authorization servers up and running through 2011.

Once the Yahoo store goes down and the key servers go offline, existing tracks cannot be authorized to play on new computers. Instead, Yahoo recommends the old, lame, and lossy workaround of burning the files to CD, then reripping them onto the computer. Sure, you'll lose a bunch of blank CDs, sound quality, and all the metadata, but that's a small price to pay for the privilege of being able to listen to that music you lawfully acquired. Good thing you didn't download it illegally or just buy it on CD!
Posted by Curious Cat at 2:01 PM No comments: 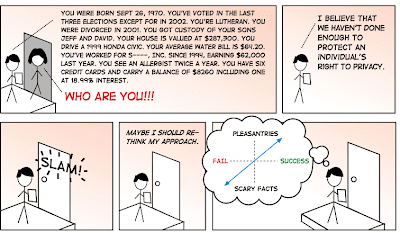 Posted by Curious Cat at 8:07 AM No comments:

It is hard to imagine how people could be more self indulgent than shown on Super Sweet Sixteen. Yet I am sure some people can manage to sink below even these people, sadly. Here is an English Perspective on the failed people shown on this show.

As I stated in, Economic Fault - Income Inequality:

"how do people even think of spending $500,000 on some kids birthday party (search for super sweet 16th if you have not heard of the crazy idea)? I really can't fathom people being so ludicrously superficial and cruel. If you have such money to throw away how can you possibly choose to spend it on a spoiled brat’s party instead of helping out hundreds less fortunate 16 year olds literally starving to death around the globe? I really don't understand. I am embarrassed to be of the same species as such people."

Dancing Around the World

The response to the first video brought Matt to the attention of the nice people at Stride gum. They asked Matt if he'd be interested in taking another trip around the world to make a new video. Matt asked if they'd be paying for it. They said yes. Matt thought this sounded like another very good idea.

In 2006, Matt took a 6 month trip through 39 countries on all 7 continents. In that time, he danced a great deal.
...
Matt lives in Seattle, Washington with his girlfriend, Melissa, and dog, Sydney. He hasn't had a real job since Stride called him up. Matt doesn't mind working, but he doesn't much care for having to show up at the same place every day.

The internet is fun for all sorts of reasons including videos such as this.