Nice simple tutorial to create a CSS nav bar with mouseover changes: Turning a list into a navigation bar
Posted by Curious Cat at 7:59 PM No comments:

We have setup several Google Customized search sites which seem to give good results very quickly.

Try our custom google search engines for 1) Management 2) Economics and Investing and 3) Science and Engineering.
Posted by Curious Cat at 8:08 PM No comments:

Earthlink has taken a spamy practice from verisign to show there ads instead of the proper response to a domain that is not found. Here is how youas the customer can fix your computer to stop being spamed by earthlink. It sure would be nice if we had some options that actually believed in customer service instead of this kind of junk.

The practice Earthlink copied from Verisign was shut down by the administrators of the internet when Verisign did it.
Posted by Curious Cat at 8:51 PM No comments:

Howard Yermish reports:
This evening, my 4-year old daughter came downstairs for some ice cream. When the commercial for the Little Mermaid DVD came on, she said, "We don't need to see that commercial. Don't they know we already bought that movie?"

Awesome.
Posted by Curious Cat at 7:14 PM No comments:

The Myth of Prodigy and Why it Matters by Eric Wargo, discussing a speech by Malcolm Gladwell.

Gladwell cited a mid-1980s study (Genius Revisited) of adults who had attended New York City’s prestigious Hunter College Elementary School, which only admits children with an IQ of 155 or above. Hunter College was founded in the 1920s to be a training ground for the country’s future intellectual elite. Yet the fate of its child-geniuses was, well, “simply okay.” Thirty years down the road, the Hunter alums in the study were all doing pretty well, were reasonably well adjusted and happy, and most had good jobs and many had graduate degrees. But Gladwell was struck by what he called the “disappointed tone of the book”: None of the Hunter alums were superstars or Nobel- or Pulitzer-prize winners; there were no people who were nationally known in their fields. “These were genius kids but they were not genius adults.”
Posted by Curious Cat at 7:14 PM 1 comment: 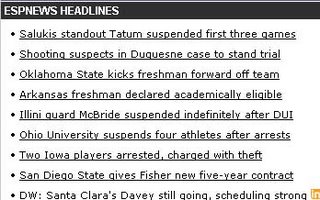 The NCAA basketball season has not started yet so there isn't much news to report. Still look at the headlines (see graphic) from ESP today: 4 are criminal and 3 others are about players being suspened or kicked off teams, 2 are about coaches. At least the 2 aobut coaches are fine. Couldn't they have some positive stories, how about writting about the success of student athletes those students that are academic stars or did some great things over the summer or explore what past basketball players are doing... Or how about stories about basketball: discuss the pick and roll or explain the swing offense or explain the effect of 3 point shooting on overall field goal percentage or discuss what the effects of relying on 3 point shoting are for a team... We just accept that the "news" of crimal activity and the like is what we should expect. I think we should expect better from the sports web sites.
Posted by Curious Cat at 5:11 PM No comments:

What Studio 60 Can Teach Us About Blogging by Tom Schmitz. Fun post with some good tips on blog management (aimed at professional blogs not really blogs for fun).

Remember those 3x5 cards at Studio 60? Studio 60 always has more cards than will fit on their board. If something does not meet your blog's standard for quality or interest do not publish it. You might send something back for rewriting or additional work. You may decide that an article does not belong. You might even decide that an article has a bigger future somewhere else on your website, in your printed newsletter or in an industry publication.