For Example to search for me, John Hunter, the first link gives your personal results and the second gives the "regular results":

Related: Should Google Use Factors Other Than User Value When Providing Search Results?
Posted by Curious Cat at 10:49 AM No comments:

The Life Cycle of a Blog Post, From Servers to Spiders to Suits — to You

Somewhat interesting post. I find their crazy too small to see graphic that you are suppose to navigate with the mouse and holding the button down another example of gratuitous flash. Why do so many people seem to insist on fancy less usable interfaces over simple easy to use ones?
Posted by Curious Cat at 2:56 PM No comments:

Is the Theory of Evolution Really a Matter of Faith?

No, of course it isn't. As the authors state:

As a natural phenomenon based on scientific evidence, evolution is not a matter of belief or faith, any more than gravity or genetics, and to ask whether someone believes in it is a nonsensical question, much like asking if someone believes in subatomic particles.

Exactly right. Now people can doubt anything they want. But certain things beyond are reasonable doubt. People can try to create controversy where really there is none among those that understand an issue in the hopes of confusing the general public. Thinking evolution is questionable is like thinking that the basic ideas of geology are questionable.

There was a time when people doubted the earth was billions of years old. That the continents drifted apart. That diamonds were created far under the earth under great pressure and heat - out of simple carbon. That the explanation for the mountains, valleys, rocks, gems, earthquakes, volcanos and on and on were essentially as we understand geology today. Today there is no serious question about the basic concepts.

Someday, my guess is before 2070 the same will be true of evolution (I would hope before 2030 - but people can avoid seeing the truth longer than I would optimistically think). I have no doubt that this will come about. By what date I have nothing more than a wild guess. When that date finally arrives those that tried to claim the was some controversy will look pretty silly - given all the evidence we have today.

Most all those questioning geology realized the overwhelming evidence required adjusting their beliefs far before the overwhelming amount of evidence for evolution we have today. Science is about adjusting your world view as new evidence provides a much more valid understanding of an area of study.

ever since Facebook blocked my account for a little less than a day people have been calling me with some real sob stories about how their accounts got turned off by Facebook and that they have no recourse.

Hoping companies will care and be competent enough to manage what you invest in creating just doesn't seem like a worthwhile risk to take to me. They will have all sorts of issues to deal with and either out of plain bad management or because they decided it is easier and cheaper to destroy (deleting it, breaking support for code you relied on...) what you have created they are very likely to not value your investment. Most likely, only if their belief of what is in their interests happens to align with what is in your interests will you be in someone decent shape (even then you are susceptible to them managing poorly).

For social networks I can see they might add value by providing useful tools to improve connections (but if they can't figure out a way to be open and interact easily with mainly internet based content don't waste your time with their old proprietary thinking model). I just don't see much need to participate in an enterprise where I would have to invest my time and energy and content and hope that the company decides not to be evil for the rest of the time I want to deal with them.

Keep most of your content under your control. For example even if your content is in Blogger, the ability to backup (and move) your blogger blog essentially leaves the content in your control. Then if Google decides to be evil you just take you backup and post it elsewhere.
Posted by Curious Cat at 10:23 AM No comments: 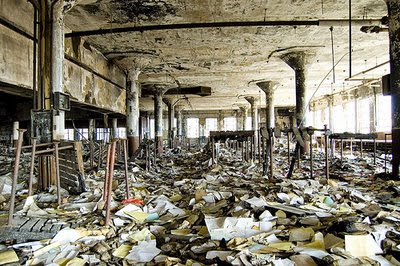 It will rise from the ashes

Detroit, with its thousands of abandoned structures, is something of a mecca for kids and adults who still do this sort of thing. There's a whole community of them here, and people come from all over the country to "explore" the city's ruins.
...
This city's school district is so impoverished that students are not allowed to take their textbooks home to do homework, and many of its administrators are so corrupt that every few months the newspapers have a field day with their scandals, sweetheart-deals, and expensive trips made at the expense of a population of children who can no longer rely on a public education to help lift them from the cycle of violence and poverty that has made Detroit the most dangerous city in America. To walk through this ruin, more than any other, I think, is to obliquely experience the real tragedy of this city; not some sentimental tragedy of brick and plaster, but one of people

Guess what income level it takes to put you in the top 1% of earners today? Answer below. Most people that will read this are tremendously rich (compared to all others alive today, or just the very rich form just a few generations ago). Check for yourself: How Rich are You - enter your income and see what your world rank is.

Yet for many having fewer toys than those around them makes them feel poor. Their problem is not too few things (deprivation versus abundance). Affluenza is a good view of the problem caused when people don't understand they already have plenty of stuff and keep looking for more.

How about giving a helping hand to those less well off through Kiva (micro credit loans to entrepreneurs). Curious Cat readers that have already made loans to help others. If you would like to be listed, add a comment with your Kiva page and we add a link to it on that page.

Comment on Red-Light Cameras Increase Accidents: 5 Studies That Prove It:

Ok, so lets say that the studies are conclusive. What actions do you suggest? If safety is important i would guess reducing accidents is important. Does that mean actions you suggest such actions as removing red light cameras and spending money to re-engineer dangerous intersections? If so what money should be used to re-engineer dangerous intersections? Gas tax funding? Or is just eliminating red light cameras what you suggest? Any suggestions on reducing the more than 40,000 people killed every year in the USA in traffic accidents? I would guess (without any evidence) red light cameras cannot account for a significant number of those deaths.

9 Digital Camera Settings for Every Photographer to Discover

In an automatic mode, the digital camera chooses its own combination of aperture and shutter speed to create a good exposure - you don’t have to do any of the thinking. But sometimes, you want more control over your digital camera, and that’s when shutter and aperture priority come into play.
...
Aperture priority mode allows you control over the depth of field of an image. The more open the lens is, the more shallow the depth of field is.

On a hunch, I changed the directory permissions (for wp-admin) from 775 to 755, and voila, I now had access to my blog’s admin pages.

Good tip. If, after you upgrade Wordpress you get a 404 page not found error when trying to access the admin section check that the directory permissions are set to 755 for /wp-admin/
Posted by Curious Cat at 11:53 PM No comments: