Too many people think they can escape to some "greener" pastures by going to live in another country. While that may be true, most everyplace has plenty of positives and negatives. It is easy to take the positives of where you are for granted and ignore the negatives you don't face (until you move).

Getting out is great. But don't expect greener pastures to make everything wonderful. There are certain traits of you and the place that can make getting out the best idea - I don't like cold, other than that I think I would enjoy Banff (mentioned in the post) a great deal. 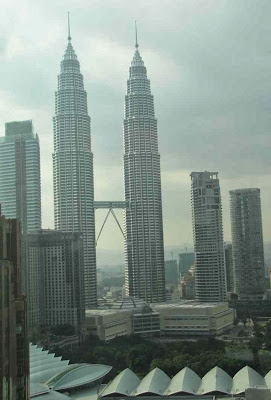 Petronas Towers, Kuala Lumpur, Malaysia.
While there are conflicts between you as a person and where you are not that make people want out - I think often it is a frustration with those negatives you have been dealing with. Some people love the new experiences - so getting out is often close to ideal. But if you don't really figure out what will make you happy wherever you are getting out often just changes one set of frustrations for another.

Political frustrations I think are this time a whole bunch. While your government is likely doing tons of totally annoying and lame stuff. Finding a government anywhere that isn't doing tons of that is very hard (there are a couple, from my perspective, that I find better than most but they tend to be in very cold places - which I don't like). Often you don't care about the lame things done elsewhere until you are stuck directly inside of the consequences. I think getting out with this as a big reason is fine, it just seems lots of these people are frustrated with the new location after a fairly short time.

Thoughts after reading: How to Love Where You Live – Treat it Like a Travel Destination

Related: Living Abroad - Living in Malaysia - Quick Thoughts on the Risks of Violence while Traveling
Posted by Curious Cat at 10:57 PM