houses an obscure subsidiary of Microsoft Corp. that helps the computer giant shave at least $500 million from its annual tax bill.
...
The Wall Street Journal said in its report that a Microsoft Dublin-based company that is used for routing patent a royalty income from overseas operations, paid the Irish Revenue $300 million in taxes last year.
...
In 2002, US companies reported $149 billion of profits in 18 tax-haven countries, up 68% from $88 billion in 1999, according to Tax Notes, which analyzed the most recently available Commerce Department data. This compares with a 23% increase in total offshore profits earned by US multinationals during the same period-total profits of US multinationals'’ foreign subsidiaries around the world stood at $255 billion in 2002.
Posted by Curious Cat at 10:00 PM No comments:

But in the present state of Europe, when small as well as great estates derive their security from the laws of their country, nothing can be more completely absurd. They are founded upon the most absurd of all suppositions, the supposition that every successive generation of men have not an equal right to the earth, and to all that it possesses; but that the property of the present generation should be restrained and regulated according to the fancy of those who died, perhaps five hundred years ago. Entails, however, are still respected, through the greater part of Europe; In those countries, particularly, in which noble birth is a necessary qualification for the enjoyment either of civil or military honours. Entails are thought necessary for maintaining this exclusive privilege of the nobility to the great offices and honours of their country; and that order having usurped one unjust advantage over the rest of their fellow-citizens, lest their poverty should render it ridiculous, it is thought reasonable that they should have another. The common law of England, indeed, is said to abhor perpetuities, and they are accordingly more restricted there than in any other European monarchy; though even England is not altogether without them.
Posted by Curious Cat at 3:32 PM No comments: 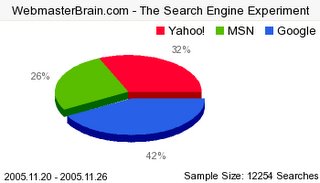 Google offered the overall most relevant results for 41% of searches, Yahoo Search for 33%, and MSN Search trailing behind with only a 27% most relevant share.

One other note is the display of the results at the search engine naturally effects people's opinion. MSN and Google were showing 3 ads above the results for each search I tried while Google showed none above (or 1 above in one case). So I can believe Google gets an extra bump in real life practice due to the better display they provide users. I also believe Google used to have much more superior results than they do now. I think MSN and Yahoo have improved and Google has gotten worse (I imagine due to concetrated effort by those attempting to fool Google into showing less valuable results higher in the returned list than they would without the extra effort put into fooling Google.
Posted by Curious Cat at 3:00 PM No comments:

The Debate We're Not Having by Robert Samuelson:

By 2030 the projected costs of Social Security and Medicare could easily consume - via higher taxes - a third of workers' future wage and salary increases. Toss in Medicaid (which covers nursing home care and isn't included in the trustees' reports) and the bite grows. We're mortgaging workers' future pay gains for baby boomers' retirement benefits.

It seems so obvious that the age at which benefits are paid needs to be raised drastically (in addition to other reforms - increasing the cap rate, not paying monthly benefits to the wealthy...).

The idea when social security was setup was those few people who lived past the expected life span would get benefits (and those benefits would only require a minimal tax (2%, I believe, with the 1935 law from the outset rasing the rate to 6% by 1949). Now the expected lifespan is well past the retirement age. The model does not work the way it is now (even with increasing social security tax over 15% of earned income - remember the employer and employee both pay social security tax on every employee's earnings). Also the elderly were the poorest age group then. Now the elderly are the richest age group.

"Our web servers cannot find the page or file you asked for.
The link you followed may be broken or expired."

Another link to something titled "more aritcles by this author" and you get sent to a search page with 16 boxes of info to fill out. What? Just show the articles by this author. Such an poor implimentation. What a shame. And many sites that probably spend millions a year on content, advertising, design... are also very poorly designed in 2005! Crazy.
Posted by Curious Cat at 7:45 PM No comments:

What is not widely known is the contribution that federal research funding played in creating Google. Google was founded by Larry Page and Sergei Brin – two computer science graduate students at Stanford University. Stanford was one of a number of universities that received funding under the "Digital Libraries Initiative" – supported by the National Science Foundation, NASA, and the Defense Advanced Research Projects Agency. (DARPA is the agency that funded the ARPANET in the late 1960's, the computer network that led to today's Internet).

The goal of the initiative, launched in 1994, was to "dramatically advance the means to collect, store, and organize information in digital forms, and make it available for searching, retrieval, and processing via communication networks - all in user-friendly ways." Larry Page was funded under the DLI as a graduate student researcher, and Sergei Brin was supported with an NSF graduate student fellowship.

Page and other Stanford researchers created an algorithm called PageRank. It ranks the importance of each Web page based on the number and importance of other Web pages that link to it. This technological advance enabled Page and Brin to develop a search engine that found useful and relevant information, which was critical to Google's popularity. Google was also prototyped on equipment paid for by the federal government's Digital Library Initiative.
Posted by Curious Cat at 5:27 PM No comments:

Innovation: Science, Engineering and the Economy

China and India each turn out thousands more scientists and engineers every year than the United States does. All of the fast-rising economies of the world recognize the connection between science and prosperity and are making huge investments, while the United States rests on its laurels.

This sums up a key point that has been overlooked in much of the discussion in the blogosphere about Innovation in America.

Innovation and Offshoring
Posted by Curious Cat at 10:28 AM No comments:

Once again the Dilbert blog has a great post, Expensive Water:

competing bottled water company noticed my choice and insisted on knowing why I wasn’t picking her lower priced water instead. The clear inference was that I’m not too bright. Water is water, she noted.

The first defense that came to mind went unsaid, but it would have gone something like this “If I’m dumb enough to buy water, I’m certainly dumb enough to pay too much for it!”
Posted by Curious Cat at 5:00 PM No comments:

This figure surprises many people. China has lost 7 times the manufacturing jobs the United Stats has from 1995 to 2002.

For more see, our post on: Manufacturing and the Economy

he northern and southern coastline of Somalia -- Africa's longest -- links trade routes for key commodities like oil, grains and iron ore from the Gulf and Red Sea region down to the Mozambique Channel. Thousands of merchant ships snake down the Somali coast to the Cape of Good Hope every year.

Some of the world's leading shipping bodies called on the U.N. to urgently address the issue.

The narrow Malacca Strait between Indonesia and Malaysia is one of the world's busiest shipping lanes and has long been a haunt of pirates.

Some 37 acts of piracy were recorded there last year but there has been a sharp fall in reported attacks after December's tsunami in the Indian Ocean, the Malaysia-based bureau says.
Posted by Curious Cat at 3:23 PM No comments:

Scott Adams has started a Dilbert Blog that is great so far.

How Certain is Certain?:

I had to weigh a 20% chance of not getting a timely wiz versus a .00000001% chance of a fireball-related death.
...
My only solace is that if this puppy goes down, the headlines will read “Plane Crashes. Dilbert Cartoonist is turned into Charcoal.” That’s called Top Billing, baby. Take that, rule breaker! I hope he’s not the new Chairman of the Fed or something. That would really suck.

Luckily I have 16 years of corporate experience, and I know how to navigate my way around group decisions. What you need is a solution that could only appeal to a committee. I suggested a compromise. I would keep everything the same, except the gun would be replaced with a donut… that fires bullets.
Posted by Curious Cat at 2:23 PM No comments: